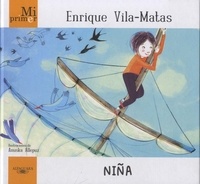 La Niña (Spanish for The Little Girl) was one of the three Spanish ships used by Genoan explorer Christopher Columbus in his first voyage to the West Indies in 1492. As was tradition for Spanish ships of the day, she bore a female saint's name, Santa Clara. However, she was commonly referred to by her nickname, La Niña, which was probably a pun on the name of her owner, Juan Niño of Moguer.